I'm in Edison Park every few weeks because my hair salon is there. Edison Park and Norwood Park are loaded with Sears houses. Today I'll feature the first of the Chicago Sears houses I saw.

The Alhambra was a palace of the Moorish kings in Granada, Spain. This Sears Alhambra is a glorified foursquare in Norwood Park. Note that the floorplan is reversed. This was a common customization and easy for Sears to accommodate. 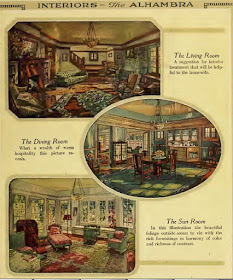 There was a testimonial from "M.A. Lange" about the house in the 1926 Sears Modern Homes catalog. "The millwork and other materials furnished are certainly of very exceptional quality."


Actually, the owner's name was Alfred F. Lange. He was listed at the Nina Avenue address in the 1923 city directory, and lived in the house with his wife Anna and their two children, Forbes "Buddy" and Joyce. Alfred was an assistant auditor for the Automatic Electric Company, a telephone equipment manufacturer.

The house was built in 1922 by a contractor.

After Alfred Lange died, Joyce Lange and her husband, Harold Reever (a noted professor of music at North Park College) moved into the house with their children to help take care of Anna Lange. Joyce and Harold lived there until 1987, when they sold to the current owner. There have been only three sets of owners since 1922!

Important Historical Information on the Building Permit
Sears homes historians often state that the architects who designed the house plans were unknown. However, the building permit for the Alhambra states that the architect was George C. Nimmons. He was a well known Chicago architect who did a large amount of commercial work for Sears, Roebuck, such as their complex on Homan Avenue (the "old Sears Tower"). He also designed a 1903 mansion in Kenwood for Sears' President, Julius Rosenwald. It would make sense that Nimmons may have also been hired to do some designs for the Modern Homes division, such as the Alhambra.

Update!
I heard from Joyce Reever's daughter, Leslie, who grew up in the Alhambra on Nina Avenue. She gave me permission to reprint some portions of her letter, below.


"The Norwood Park train station and the train played a very important part in the beginnings of the Sears, Roebuck home that my Grandparents, Alfred and Anna Lange, purchased around 1921 and is thought to have been completed in 1922. The house, which came to Norwood Park on the train (some 30,000 pieces), was possibly brought to the site on wagons. The site itself was close to an acre of land.

"There was plenty of space to plant and plant our Granddad did. There were grape arbors in the backyard and many fruit trees.

"Mark [Leslie's brother] also had a number of memories of the inside of the home. Mark remembers coal heating until 1950. A chain on the first floor was attached to dampers in the basement; this device helped to control the heat. Following this, our Grandparents converted to gas. (As far as I know the side door where to coal was shoveled into the basement still remains.) There was one telephone handset on the first floor. Mark remembers that it had a brown cord. When you wanted to place a call you talked with the operator, and she would place the call for you.

"As children, Mark, Pam, and Leslie moved into the Norwood home with their parents Harold and Joyce Reever. The year was probably 1952. Joyce was Alfred and Anna Lange's daughter. Granddad had died, and Grandma needed our support. My brother, sister and I would spend our growing-up years at the home on Nina Avenue."