We're closing a chapter in the research of Sears kit homes, which were sold from 1908 to 1942. The original owners of the homes are gone now. It's 2017, and most of the children who were raised in the homes and remember them being built are gone as well. Soon we will lose all firsthand accounts of where the Sears houses are located.

So it's unusual for me to get a report from someone who remembers a Sears Honor-Bilt house being purchased and constructed.  Luckily, there have been a handful of houses I have discovered this way--a Sears Cape Cod in Arlington Heights, a Sears Skywater in Crystal Lake, a Sears Stanford in Painesville, Ohio.

However, I often hear from people who said they were raised in a Sears house built in the 1950's. How is that possible?

After WWII, Sears sold a line of homes called Homart Homes. Unlike the Sears pre-cut kit houses of the past, Homart Homes were mostly prefabricated. They consisted of factory-built wall panels with windows and doors already installed. Roof gables, front door canopies, roof panels, and basement stairs were also pre-assembled at the factory.

Edward and Lorraine Fik bought a Homart Home in 1951 and built it in Oakbrook Terrace. Today, that house was preserved and is the home of the Oakbrook Terrace Historical Society.

Thank you to Bob Shanahan of the Oakbrook Terrace Historical Society for providing information on the house and all the historic photos.

UPDATE!
The restoration of the Homart house is complete.
Bob Shanahan wrote in an email: "We put a new roof in the original green color, rebuilt the overhang at the front door per original plans and resided the house with the original cedar shake shingle look." 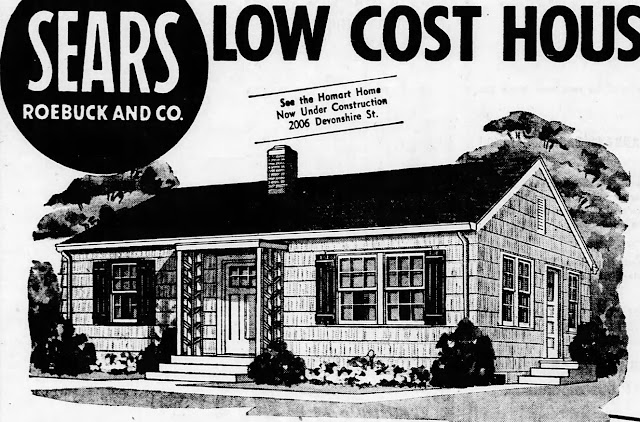 If you ever wanted to go inside a Sears house, the Homart house is open to visitors on Wednesday afternoons.

I'm pretty sure the house we are getting ready to move into is a Sears house. It was my grandfather's home. I passed away 2 years ago. He was 95 years old.

I remember my parents talking about how people could buy a house through Sears.
Those were obviously the days.