In this post I will re-examine another common “fact” about Sears homes that is frequently mentioned, but is incorrect.

"... by 1940, Sears stopped selling kit homes, as many people had lost their jobs and defaulted on their loans."

Despite oft-cited misinformation, the Sears Modern Homes division continued selling houses after the last catalog was issued. Most Modern Homes sales offices stayed open and Sears continued advertising its pre-cut homes in 1941 and 1942. In these years, Sears positioned itself in more of an advisory role.

Sears would assist potential home buyers through the process of obtaining financing (usually through FHA), selecting a contractor, and ordering all the building materials from Sears. In 1941, Sears said they had more than "60 up-to-date plans" from which to choose.

Some of the houses being sold in 1941 and 1942 were from the 1940 Modern Homes catalog. Some were new models never seen before, such as the Gloucester, a simple ranch with an expandable second floor/attic.

Sears was also focusing more on their Home Club Plan developments during this time. As the defense industries ramped up for WWII, there was a strong home demand in industrial areas, particularly in New York and Northern New Jersey. In these Home Club Plan communities, Sears would work with local developers who would build a large number of new Sears pre-cut homes at one time. Some developers would allow modifications to the standard models, others would not. FHA would provide the financing, and the customer would not have to pay any legal fees or title and survey fees.

Cranford, NJ
In the Cranford Home Club Colony, for example, the development was called Sunny Acres and consisted of 172 homes. The houses were built between 1940 and 1942. Buyers could get a four-room house for $4335 or a six-room house for $5250. Prices varied among the various colonies, but they were always under $7,000.


Elyria, OH
In the Elyria Home Club Colony, the development consisted of 30 Sears homes on a single block. All homes were in the $6,000 range.

Grand Island, NY
In Grandyle Village, NY, Sears had eight models for sale, each around $5,000. They constructed about 50 houses, many on Love Road. 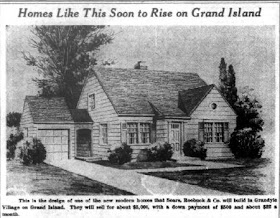 North Tonawanda, NY
In North Tonawanda, NY, Sears partnered with local banks and local contractors to build a block of homes on Lindsay Place. The development was called Lindsay Gardens, and the average home price was $5,000.

Sears also continued to sell houses to corporate customers in the years after 1940. For example, there are 61 Sears houses in Hellertown, PA that were built in the early 1940's for workers at Bethlehem Steel.

So if you suspect your house might be a kit from Sears, but it was built after 1940--it may be one!

Why did Sears stop selling homes after 1942?

It makes me wonder if there is one of those neighborhoods in Cincinnati. Rebecca Hunter had listed in her book that 40 Sears homes were purchased by one person in 1939-1940, but I've never seen a whole neighborhood of Sears homes here. I'll have to put my detective hat on.

Hi, Donna! It was weeks of newspaper research and good ol' Google Maps.

I doubt there is another Home Club in Ohio. The development in Elyria was touted as the only one in the midwest. If there was one in Cincinnati, it would have been after 1942.

this is amazing lol we are about to buy a 2 bedroom home in sterling illinois that im pretty sure is either a berwyn ot a mayfield. it has the exact same floor plan and the 2 cute arches on front porch . they kind of ruined the arches though who ever put the vinyl siding on they are kind of squared off now :( but it still has all the original wood screens and storm windows and all are in mint condition , they are even numbered as to what window they belong to lol. we are in love with the house and i hope its a real sears home , are there any ways to tell for sure if it is ?im 99% sure it is becuase of the exact, down to the inch floor plan , would be great to know for sure though :)

Yes, Theresa, that is a Mayfield! I just looked it up on realtor.com. If you say the measurements match up to the inch, we have a winner!!

When you get moved in, please send me interior and exterior photos (and markings on the lumber if you find them). I'll be happy to feature your house on this website. Maybe you'll find a shipping label with a date.

Awesome research Laura. You're rewriting the book on the history of Sears homes. But those later Sears homes are next to impossible to identify!

My neighborhood (now called Ashford Park), in Brookhaven, GA was built in 1946-1948, and I recognize several of the smaller models from around here. The neighborhood was built for defense workers off of the western edge of the Dekalb-Peachtree Airport, which was then a Naval Air Station. My model is one of the 4-bedroom Cape Cod models, with a shed dormer in the back to give the upstairs more room. According to the country recorder's office, mine was built in 1947. (If Sears stopped building them prior to then, maybe the Federal gov't had a stockpile of these kits?)

To add to my previous comment re: Brookhaven, GA: I did not find my house configuration in the Sears archive (http://www.searsarchives.com/homes/1933-1940.htm). (There are over 100 kit homes in this area from those 2-3 years alone, all of which were erected from the same small # of kits, though in the last 10 years several on my street alone have been torn down for new construction.) Perhaps ours hail from a different provider?

After WWII there were many national prefabricated house manufacturers including National Homes, Gunnison, Lustron. Celotex and others. Aladdin Homes was also selling kits during those years:

We live in the house that my husband's grandfather built in 1955- it is the Nantucket model. The windows have now been upgraded to bay windows and he built a beautiful enclosed deck to the left of the house.. we are lucky enough to have pictures of the build.